My first claim to fame is that I have been on television!
In 1981 MWM and his Mother were contestants on a game show called "The Generation Game" on the BBC with Larry Grayson as compere. My mother and myself went with them to London, as guests, and spent two nights in a top London hotel all expenses paid. We travelled down to London by train on a Wednesday morning and had Wednesday afternoon and evening free to go sightseeing and have a lovely meal at a nearby restaurant.
On the Thursday morning MWM and MIL and the other six contestants were whisked away to BBC television studios for a tour, where they saw Blakes 7 being recorded, and then each couple met the script writers and director to discuss the show and work out the details of their interview. They had already supplied details of themselves on the form they had to submit to be chosen for the show. In the afternoon they were all returned to the hotel for a brief rehearsal. of their entrances and interview with Larry. Of course they couldn't rehearse the actual games because they do not know what they are expected to do until the show is being recorded.
My mother and I spent the day shopping - of course, and when the contestants returned we all had a meal at the hotel and got to know each other. After the meal the contestants were taken by limousine to Shepherd's Bush Studios to record the programme. All the guests were ferried to the studios by taxi and whisked past the waiting crowds through the stage door!
Although the actual programme was only screened for an hour it actually took two and a half hours to record. During the interview Larry Grayson had cards with details of each contestant and on MWM's it said that he and I played charades whilst shopping in the supermarket - which we did sometimes. I had only found out at dinner that evening that I was to be part of the show and was expected to stand up and signal something to MWM, as though we were in the supermarket to see if he knew what I meant. The crucial point came in the interview and Larry shouted "where are you P.....?", so I stood up and said hello. He then asked me if I would signal something to MWM which I did and of course he got it right - well we had rehearsed it! That was my claim to fame - not much I know but as far as I know I'm only one of a handful of guests to take part in the show.
It was only after the contestants had been introduced that they discovered exactly what they had to do and the looks on their faces was a sight to behold I can tell you! Their first game was to join a girl's marching band with MWM twirling and tossing the baton and MIL playing a pair of huge drums that she could barely carry! They did very well and got top score for that game. The second game was putting well known phrases and saying into order and unfortunately they got one wrong because they were rushing - ironically enough the phrase was "More haste, less speed" and they put "Haste more, speed less"! So, that was them out of the game. It didn't really matter that they bombed out because we all had a fabulous time and once the recording had finished we were all ferried back to the hotel and ended the evening at a local Indian Restaurant. Of course we have the whole thing on tape and when we want a good laugh we watch it.
The following day after breakfast we said our goodbyes to our new found friends and set off back to the station to catch our train home. We spent the whole journey reliving our claim to fame.
Whilst MWM and MIL didn't win the big prizes all the contestants did get a momento of the show in the shape of a silver door with their name engraved on it and a plaque on it saying "Larry Grayson's Generation Game 1981" and here it is: 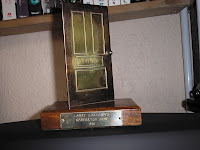 My second claim to fame is that MWM, my youngest son, DIL and I appear on the Peter Kay DVD "Live at the Bolton Albert Hall(s)". The Albert Halls are situated in Bolton Town Hall which is Peter Kay's home town, and this was one date during his 180 date "Mum wants a bungalow tour". On the DVD you can clearly see son and DIL going into the town hall and then during the show the camera pans into the audience and there we are - MWM and me! You wouldn't think anyone would notice would you, but let me tell you I've lost count of the number of people (who know us obviously) that have said "That was you on the Peter Kay DVD wasn't it?"
You can see some Peter Kay video clips here:

Have you got a claim to fame?


My knee
Monday 26th March
Great sleep last night and now I am able to do a straight leg lift whilst sitting in a chair! No mean fete I can tell you and it hurts like hell, but part of the exercises so must be done.
Thoughtfully composed by Akelamalu at 10:43

Wow! Thats very interesting! My only claim to fame was watching the Deerhunter movie be made...lol. I was hooping to be "discovered"...sigh, but I wasnt! Oh well...their loss! lol

Hi catch - I'd love to watch a movie being made. Shame you weren't discovered but, as you say, their loss! :)

Not yet, but one day!

Wow... you're a pretty famous person!

Are you sure that you are not related to the HobNob family? You know, the SAS of the biscuit world. "Come on dunk me. Again, go on again or I'll sup your brew!!!!!"
Or are you from the floppy, 'its too warm', Rich Teas?

Thanks for visiting. Love your blog and choice of music.

By the way, welcome back.

Hi cream, thanks for dropping by. Glad you like what you see and hear. Please call again.

That's better than my claim to fame, which is a couple times being on the local news (once in Klamath Falls and once in Eugene) playing trombone. I think MWM's silver door is a spiffy souvenir.

Hi vita, you play the trombone? Wow that's better than being on the TV, that's a talent!