After a very early breakfast on board, we disembarked our ship for a coach ride to the Three Gorges Dam.  The Three Gorges Dam is a hydroelectric dam that spans the Yangtze River by the town of Sandouping, it is the world's largest power station in terms of installed capacity. 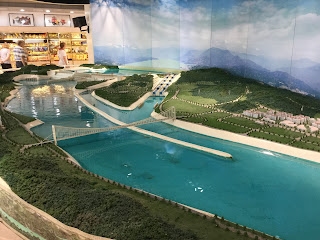 As well as producing electricity, the dam is intended to increase the Yangtze River's shipping capacity and reduce the potential for floods downstream by providing flood storage space. The Chinese government regards the project as a historic engineering, social and economic success,with the design of state-of-the-art large turbines, and a move toward limiting greenhouse gas emissions. 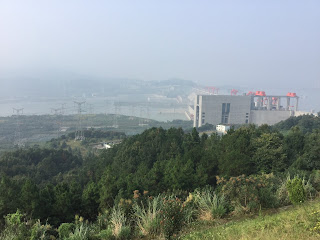 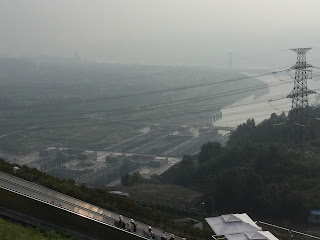 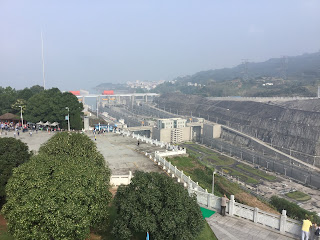 However, the dam flooded archaeological and cultural sites and displaced some 1.3 million people, and is causing significant ecological changes, including an increased risk of landslides.  There is no doubt that the dam is a fantastic piece of engineering and there are areas that would appear to be more of a park, quite pleasant in fact. 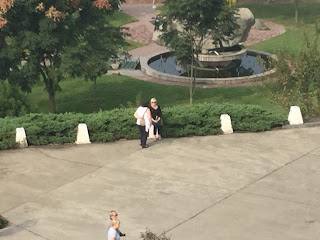 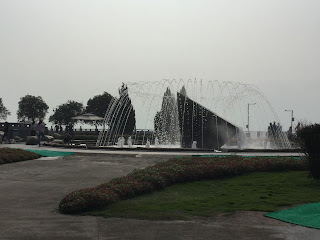 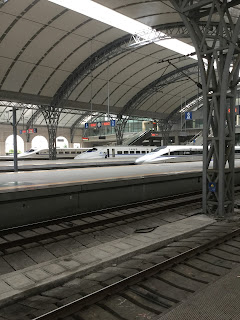 Our party of 40 had seats booked together in one carriage, along with all our luggage, which we had to store at either end of the carriage. 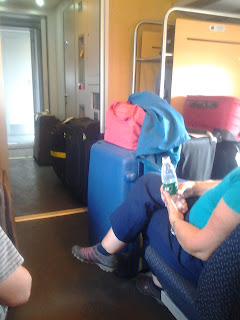 The seats are quite comfortable considering we had a 3 hour journey.   Our tour guide said she would let us know about 10 minutes before we were due in to our station as we needed to be ready to get off.   She suggested we block the exits so no-one could get on before we had got off as we only had a matter of minutes before the doors closed automatically and couldn't be opened manually.   If we didn't get off in time the next stop was Shanghai!   Thankfully we all got off safely and porters took our luggage to the coach, which then took us to lunch - yes another Chinese banquet.

After lunch we were transported to the airport for our flight to Xian.  After an uneventful flight and bus journey we arrived at our hotel about 10.45p.m. that evening and were so tired we ordered room service - not a chinese banquet but a burger and a beer for a change!    Sleep came easily that night.

Please join me for Part 9 when we visit The Terracotta Army -  the main reason I wanted to visit China.

Thoughtfully composed by Akelamalu at 09:00 7 comments:

Whilst heading to our next destination I took advantage of the onboard facilities and enjoyed a fabulous foot massage, before joining MWM to marvel at the scenery as we travelled through the Qu Tang Gorge, the shortest and most majestic of the Three Gorges, it winds five miles from Baidi City in Fengjie County to Daxi Town in Wushan County. 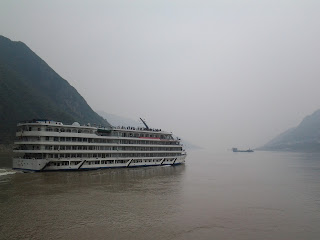 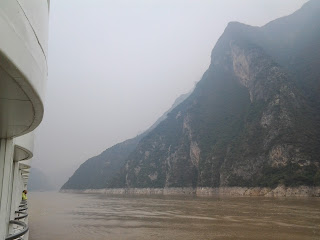 After lunch we sailed through the Wu Gorge,  the second of the Three Gorges of Yangtze River, famous for its elegance. Winding over 25 miles, it starts from the estuary of Daning River (east of Wushan) in the west and ends at Guandukou in Badong, Hubei Province.  Because of the long and deep canyons here, the daily period of sunlight is short which impedes the dispersal of air borne moisture within the gorge and so creates clouds and fog in a variety of fantastic shapes.

We docked mid afternoon to join our next excursion, which was a Sampan cruise through the Wu Gorge to the Goddess Stream, which cannot be reached other than by sampan. 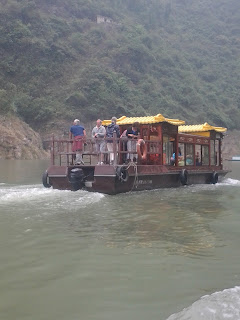 The scenery was magnificent as you will see from these short videos.

Our lovely guide on the Sampan encouraged us to join in the singing on the way back to the ship.

After a lovely day cruising, sightseeing and singing we were ready for a rest in our cabin before the Farewell dinner,  and the following day we would be leaving the ship for our onward journey.

Join me for Part 8 when we visit the 3 Gorges Dam before taking the Bullet Train to Wuhan to catch a flight to X'ian.

Thoughtfully composed by Akelamalu at 09:00 6 comments: