Due to moving home I haven't had time to create a new Peace Globe this year, but I didn't want to let the Peace movement down so I've used last year's effort.  If you want to join in,  fly your Peace Globe and go to  Mimiwrites.blogspot.com and sign Mr Linky. 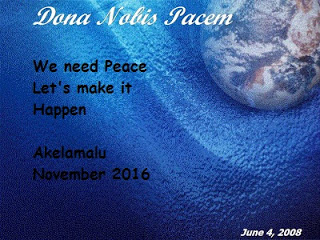 Thoughtfully composed by Akelamalu at 08:55 36 comments:

I can't believe it's almost 12 months since I posted anything on my blog!

I confess I've been spending a lot of time on Facebook - I know you think I'm a traitor yes?

Trying to remember what's happened since I last posted -

Late November 2016 we had two weeks holiday in Gran Canaria
May 2017 we spent two days in Nottingham with good friends
Beginning of June 2017 we had 8 days in Lake Como, Italy, including a trip on the Bernina Express Train to St Moritz and a visit to Milan.
Beginning of July 2017 we had 4 days in London sightseeing and a show.
August 2017 we had 3 days in Edinburgh to see the Tattoo. Then friends came to visit us for a couple of days.

September 2017 MIL moved into sheltered accommodation and we decided we will move into our bungalow, which she lived in, and sell our house.  Since then we have been overseeing work being carried out on the bungalow ready for our occupation,  and the sale of our house is going through.  We should be moving week beginning 13th November 2017 all being well.