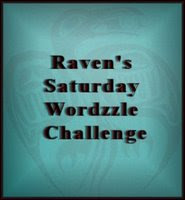 The idea is, every week Raven (Views From Raven's Nest) gives you between 8 and 10 words/phrases and you have to create a small but coherent paragraph using every one of them and the same with the mini challenge. You can do either, both or a megawordzzle using all the words, or even all three, it's up to you, you can post them on your blog or email them to Raven. If you join in go to Raven's and put your name on the Mr. Linky so other participants can come visit you.

“Here, have one of these sugar coated turtles” said Albert to his wife, who was sitting in the recliner reading a magazine on prospecting.

“Shame on you Albert, you know I’m on a diet!” said Alice.

“Don’t you be worrying about those luggage handles, I love ‘em” said Albert candidly.

“You mean ‘Love Handles’ Albert, get your brains in gear” laughed Alice.

“Whatever” said Albert, suddenly startled by a knock on the door.

“That’ll be the police officer who said he’d call to take your statement about the accidental drowning of your ex wife” said Alice. “By the way, when are we moving into her house on the Klondike?”

And for the mini: paragon of virtue, cats-in-the-cradle, swamp, sprinkles, garbage

Smokey was licking the sprinkles from baby’s chin.
He’d waited until mother took the garbage out to the bin.
“The cat’s in the cradle again” mother cried
“A paragon of virtue you told me, you lied
When you asked me to take it in from the cold,
Take it back to the swamp where it belongs!”

Ali ‘Sprinkles’ Cordell, the lead singer with the group, ‘Sugar Coated Turtles’ had a magical quality that endeared her to everyone who heard her sing, and so the group had been signed with one of the biggest labels in the recording industry. The group were on tour after the release of their first album, ‘Recliner’. Being from Louisiana they sang mostly ‘Swamp Pop’ but their first hit had been a cover version of the folk/rock song ‘Cats in the Cradle’, which had gone straight to number one. The tour was a great success and they had become good friends with their support band ‘Paragons of Virtue’.

Sprinkles was in love with the lead singer from ‘Paragons of Virtue’, whom she likened to Richard Gere. He looked nothing like Richard Gere but she thought he had brains and he reminded her of the part Richard Gere played in ‘Officer and a Gentleman’. Well that was until he left her drowning in tears.

Picking up his bag he told her candidly “I don’t want to be tied down, I was just prospecting honey” before walking away.

“Shame on you” Sprinkles railed. “You belong in the garbage can, you rat!”

And so Sugar Coated Turtles’ new hit single was born -

‘He Walked Away From Love With Just His Luggage’.

Thoughtfully composed by Akelamalu at 06:00

That Alice is cold.

It's not the kitty cat's fault.

Sprinkles is a great stage name.

Oh please, no swamp for kitty...send her here, we'll take her in!
Good job!
Sandi

All great but the last one was priceless. Love the new hit song, but I think my favorite line was "I was just prospecting, honey." Have to feel bad for poor Smokey who wasn't really doing any harm... just kitty kisses...

There you go with that murderous twist again in your first Wuzzle! You should be a writer of who-done-its!

Not so sure I'd want to chew on a sugar-coated turtle!

Do you think Alice knew what the secret ingredient in the sugar coated turtles was?

Mother didn't really mean it about Kitty going to the swamp Sandi, she was just mad. ;)

You'll be glad to hear that Smokey was reprieved Raven. Glad you enjoyed them. :)

I like a story with a twist Linda :) The turtles were made of candy, you would like them. :)

I think Alice was very wary after what happened to Albert's first wife Reston Friends!

All well done. If I were Alice I'd watch out if I were her and keep that yap shut LOL. She could dawn cement boots very easily LOL. Well done. Your writing is always so good. You've got a very good detective type of mind :) Have a great weekend :)

Killer ending for the first one. And the Megawordzzle is again my favorite:

'whom she likened to Richard Gere. He looked nothing like Richard Gere but she thought he had brains and he reminded her of the part Richard Gere played in ‘Officer and a Gentleman’.' And what a blow-off line as he hits the road!

Oooh, wha a deliciously compact story! Was Albert's ex really drowned accidentally, or is there more to the tale?
I almost missed your mini - I scrooled down too quickly, then couldn't understand others' comments. What a great little nugget of verse though, kudos! And you mega was super! "I was just prospecting, honey" - the rat! Thse were really good reads!

Your mega wordzzle cracked me up! I think that really is a country-western song, you know.

I wonder about Alice, maybe she is the one who took care of the ex-wife, and now is setting up her husband.

What a great wordzzle! I loved them all.

"Back to the swamp with you, where you belong" LOL!!

Alice definitely has to watch her back Thom! Glad you enjoyed them m'dear. x

Thanks Julia I'm so pleased you enjoyed them. :)

Aw you're very kind Argent, thankyou. I don't think the drowning was accidental. ;)

LOVE this! Must get my brain in action! lol! Both cells even!