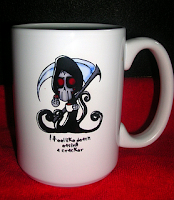 Linda at Are We There Yet is running a competition called "When have you felt like Death Eating A Cracker" to help promote her daughter Amanda's new venture Artistic Intoxication, where she sells everything from coffee mugs, tee-shirts, greeting cards, mouse pads etc all adorned with her own original artwork. The prize is one of Amanda's coffee mugs with a choice of two designs. All you have to do is write a post about when you truly felt like "Death Eating A Cracker", with links to Linda and Amanda (as I have done), let Linda know you're taking part and Bob's your uncle and Fanny's your aunt!

There have been many times in my life when I have felt like "Death Eating a Cracker", but my most recent memory was February 2006.

If you have read my blog you will know that we spend a lot of time on the East Lancs Railway because (a) MWM loves steam trains (b) the trains usually have a buffet car on them (they sell alcohol) (c) there's a great selection of pubs at the stops along the line from Bury to Rawtenstall (d) the Trackside Bar at Bury Station sells a great selection of Real Ales and good food!

Now you may have the idea that we drink a lot - we do, but only at weekends! Anyway, it just so happened that ELR arranged a Beer Festival at Bury Station in February 2006. They were looking for sponsors and our son persuaded his bosses to sponsor a barrel of ale which entitled them to two tickets and 6 pints of ale each at the beer festival. Luckily for us our son's bosses didn't want these freebies so they gave them to him, he didn't want them either so he gave them to us. You can see where this is heading can't you?

We're not greedy so we took our lovely friends, K & T, with us to the event and shared the beer tokens. Whilst deciding which beers to use the tokens on we were allowed to sample the beers which meant at the end of the day we were all merry ( to say the least). Not content with that when we got back to our house we opened some wine.

We finished the wine and K&T went home. They told us the day after that they had just gone for a lay down on the bed before getting something to eat and woke up at 1.30 a.m the following morning! We however had just got our second wind so went to our local to meet some other friends. I even managed to play a game of Bingo, and when my friend shouted Bingo for the second time I said "Oh you've won again!" "No I haven't" she said, "but you have" and promptly marked my last number off! I had totally missed it.

We'd had a fabulous day and evening and got back home about midnight. We went straight to bed as I had to be up at 6 a.m. the following morning for work. Now you might be thinking I didn't surface the following morning but I did, and I got to work on time, but boy, oh boy, did I have a hangover. I drank gallons of water that day and did very little work. Luckily I worked in an office on my own and didn't get many interruptions that day so was able to keep my head in my hands for most of the day. That my friends was the last time I felt like "Death Eating A Cracker"!
Thoughtfully composed by Akelamalu at 08:38

Ak, you hae another award m'dear. Please stop by and pick it up!

Glad you enjoyed your day at York.
Beautiful photos.
Death eating a cracker!! I like it!

"Death eating a cracker"....must be the next step on from being "cream crackered". I enjoyed reading your story...one of the reasons I don't drink much now is because I just can't face the hangover.
rx

Nice day out. Wish I was there.

Also a note for Ruth. You don't get hangovers if you stay drunk.

flowerpot you enjoyed my hangover? :)

PS Flowerpot thankyou for the award, you're so kind!x

Cream I'm glad you enjoyed the photos and my tale about my drunken demise!

I don't really have hangovers Ruth mostly I stop drinking before I get that bad!

dx thanks for stopping by. You are so right, Reality is caused by a lack of alcohol!

I can fully see why you felt like Death eating a cracker after all that! My hat is off to you for being able to actually get up at 6:00 a.m. and go to work! I'm sure I never would have been able to!

Thanks for such a great entry and for playing! Good luck!

That's how I feel today...too much fun last night, and I am all drag ass for work!

It all's due to YEARS of practice Linda!

Ah but it was your Birthday Jenny you had a good excuse!

hmmm to be honest i've never heard of the saying 'death like eating a cracker' and i had NO idea what yall were talking about for a minute lol sometimes the term 'cracker' means something else lol anyways, i've never had more than a bit of a stomach
ache back in my drinking days and i had less fat on the body. the more body fat, the faster/more you get drunk lol now all it takes is one sip and my legs go weak! lmao

Oh lord, what a great phrase. Death on a cracker. I'd love to be able to say that I've never experienced what you did, but I cannot tell a lie.

Makes me thirsty just thinking about it.

That's just my experience Paul, your's could be something completely different!

I hadn't heard the expression either ciara until I read Linda's post, but I knew what she was talking about right away.

It just sums it up doesn't it rotten correspondent. :(