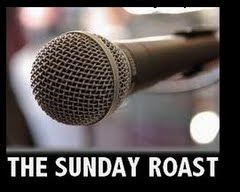 You may or may not remember that way back on April 6th 2008 I was the subject of the Sunday Roast over at David McMahon's blog Authorblog. Mine was the 10th in a series of interviews which graced David's blog on Sundays up until the last one (number 84), which he published on 20th September 2009. David decided his blog would have to take a back seat and along with it THE SUNDAY ROAST feature which his loyal readers enjoyed so much. David is going to concentrate on his writing - he's a published writer and a fabulous photographer - you can see some of his photographs on his Authorblog or his Red Bubble site.

Thankfully Eddie Bluelights at Clouds & Silver Linings has been handed the baton and is taking on the responsibility of bringing new and interesting blogs to our attention from now on. It would have been such a shame to see such a great feature disappear from blogland - so THANKYOU EDDIE!

Thanks for keeping the word spread!

You guys are great at PR.

I, too, was one of David's roastees and this is a great feature. Hooray for Eddie!

I am not sure what a Sunday Roast is but I will go there and check it out just for you.

I hope you are doing well.

will check it out, thanks honey...

Thanks for the info my friend. I hope you are well :) Aloha

I just left Eddie's place and was so pleased to see that the Sunday Roast was to continue! And thanks for spreading the word!
Sandi

I hardly have time to visit all the blogs on my want to list.

Thank you very much for your valued support Akelamalu and I see you are a Lancastrian - me too!
The Roast is indeed a fab column and I am very pleased I am able to keep it going - Thanks again ~ Eddie

Visited Eddie's first post on Sunday and was thoroughly impressed. I think he will run the good race with the torch he has taken up and we will all be proud of him.

That's great that the feature will continue.

Dear Akelamalu,
I do remember you been the subject of sunday roast.. It was a great post and i enjoyed every bit of it :)
Have a great day
♥ & ((hugs))
bindi

I had no idea you had done one of David's Sunday Roasts - shame on me!

Well...I'll go over there now and take a look.

Great seeing ya back, m'dear!

Hope you had a wonderful weekend!

I hadn't seen this feature before - enjoyed reading your interview. I'll look out for future ones.

I wasn't aware that you had been roasted. I shall have a look for your inerview.

akelamalu: hehehe. i love to say that name. ahem...sweets, i want to tjank you for that link. It sounds like a wonderful blog...and to roast someone...hello, it sounds like an old fashion bar-b-q like we have on a lazy summer Saturday...back in the south...er, Southern Cal that is. hehehe.

I shall put on my calendar to drop by.

Thanks for the info my friend. I hope you are well :) Aloha
Work From Home