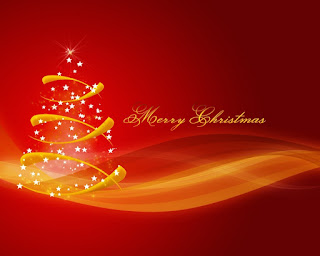 to all my readers
and thanks for sticking with me.
xxxx


Thoughtfully composed by Akelamalu at 06:00 18 comments: 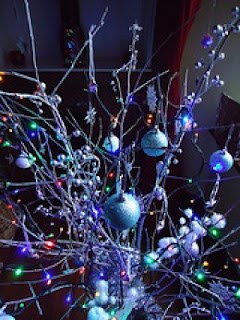 They were dirt poor, living in a poor neighbourhood but Christmas was always a magical time for Kit.  There was no money for fripperies but Kit needed a Christmas Tree.

"Joe, make me a Christmas Tree" she said to her youngest son.

"Use your imagination" said Kit.

Why did she always demand such things of him, Joe wondered, just for once couldn't she ask one of the others to come up with the impossible.   Oh well, there was no use in sulking, he would just have to get on with it and do his best because his mother would not accept anything less.

On his way back from work that day he decided to take the short cut through the park, as for once he didn't have any errands to do for Kit or the neighbours to whom she so readily offered his services.   Busy wondering how he could fulfill Kit's latest request he was not looking where he was going and suddenly found himself flat on his face having tripped over a broken branch off a tree, which had fallen as the result of the storm the day before.   Drat it, he thought as he dusted himself off, then *ding* a lightbulb lit up in his head - he could maybe do something with the branch!  It was quite a big branch with quite a few forks and twigs attached so he grabbed it by the thickest part and dragged it as carefully as he could along the streets until he got it back home.

Once home he found a bucket and filled it with stones and soil and planted the branch carefully so that it was secure and standing proud.   He searched the cellar and found some white paint and set to work to paint the branch.  Whilst the paint was drying he searched the house for anything that would liven the tree up; bit of tinsel from a previous Christmas, a couple of paper chains Kit's grandchildren had made at school, a small doll one of the grandchildren had left lying about dressed in crepe paper would make a fairy for the top of the branch.  He carefully moved the branch to the front room and set it in the front window, it actually looked like a Christmas Tree he thought when he'd finished dressing it!

"I knew you wouldn't let me down" a delighted Kit told Joe.

Soon word got round the neighbourhood that Kit had a Christmas Tree, something no-one else had, and that's when the frequent knocks on the door started.  Neighbours arrived asking to see the Christmas Tree bringing little gifts to hang on it - an odd earring, another piece of tinsel, a long forgotten fripperie from more affluent times.  Before long the Christmas Tree was shimmering and sparkling and was truly magnificent.    Kit was thrilled and so were the neighbours who claimed part of The Christmas Tree as their own. On Christmas Eve Kit's family and neighbours gathered in the front room and sang traditional Christmas Carols whilst marvelling at the Tree.  Everyone agreed it was the best Christmas Tree they had ever seen and vowed that every year they would do the same thing again.


This is a true story - Joe was my Dad and Kit my grandmother.


Thoughtfully composed by Akelamalu at 14:47 16 comments:

As you know we've just spent ten days in Sharm El Sheikh, Egypt for some much needed winter sunshine and we weren't disappointed.   We did absolutely nothing except lie in the sun, read (I read 7 books), eat, drink and sleep and it was wonderful!

Here's some photos of us enjoying ourselves.